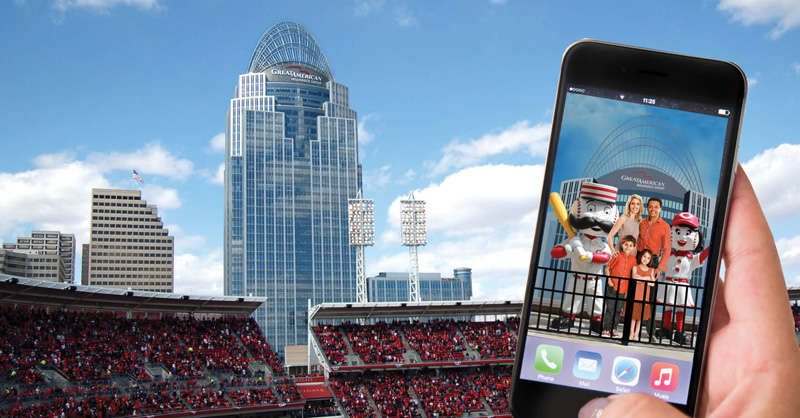 Tweet your photo spot photos to us and win the ultimate Reds prize pack!

ELIGIBILITY: The “Tweet for Diamond Seats!” Photo Contest (“Contest”) begins on Thursday, March 28 and runs through July 31, 2019. The Contest is open to persons ages 18 or older who (1) take a photograph at the Great American Photo Spot; and (2) tweet the photograph to @GAIGroup.

TO DETERMINE WINNER: One eligible photo will be chosen by random drawing on August 2, 2019 (the “Drawing”). Odds of winning will depend on the number of entries received. Winner will be notified no later than August 7, 2019 via Twitter.

PRIZE: One winner will receive four Diamond Seats to the Cincinnati Reds September 7 home game. Prize package has an approximate value of $1,100. Winner will be responsible for all federal, state and local taxes, and any other expenses associated with acceptance of the prize. No travel arrangements or monetary compensation provided. Prize is not transferable or assignable and no substitution or cash redemption is allowed. Prize is provided by Great American Insurance Company, 301 E. Fourth St., Cincinnati, OH 45202.

LIMITATIONS OF LIABILITY: Great American Insurance Company, and its parent, subsidiaries and affiliates (collectively, the “Company”), is not responsible for any phone, computer, online or technical malfunctions, delays or human errors that occur in the processing, transmission or receipt of entries, or for entries that are misdirected, garbled, lost or delayed by phone and/or computer transmissions.

OTHER: By tweeting photo to @GAIGroup, participant gives the Company permission to retweet his/her photo for commercial purposes and states he/she has secured permission from anyone pictured. By participating, participant agrees to release the Company from any and all liability, loss or damage arising out of or in connection with participating in the Content. By accepting prize, winner further agrees that Company is not responsible or liable for any warranty, representation or guarantee, express or implied in fact or in law, relating to the prize, or any portion thereof, including but not limited to its quality, merchantability, mechanical condition or fitness for a particular purpose. Any photograph deemed to be inappropriate by Great American Insurance Company, in its sole discretion, will not be eligible for the Drawing. Company reserves the right, at its sole discretion, to modify, extend or terminate the Contest, or to disqualify any individual found to be violating these Official Rules or suspected of attempting to disrupt or defraud the entry process or the operation of the Contest.

We are pledging a donation to Cincinnati’s Go Red For Women movement.