The Privatization of Jails in the United States

While government has traditionally funded and operated correctional facilities, private jails and prisons have a long history in the United States. The first for-profit prison was established circa 1852 and was located in San Quentin, CA which was privately held long before it was state owned1. Prison populations exploded in the 1980s as a result of dramatically increasing incarceration rates driven substantially by the “War on Drugs.” By 1990, state prison populations reached 115 percent of their highest capacity. While voters supported criminal justice policies that increased incarceration, they rejected an average of 60% of prison bond referenda in the 1980s.2

To respond to this financing issue, states turned to private contractors to operate private for-profit prisons. The overarching theory was that private prisons, motivated by open market competition, would operate at an increased efficiency and cost savings versus traditional publically run facilities. Competition would also drive an elevated level of accountability that was not necessarily predominant within public operations. Texas was the first state to adopt legislation concerning such facilities in 1985. The first private prison at the state-level opened in Kentucky in 1986. Since their first use in Kentucky, private prisons have expanded to other States.3 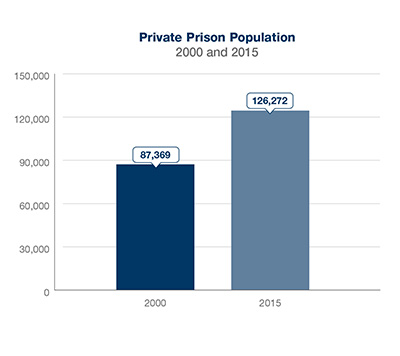 Currently, privately run facilities are being considered mainly for minimum security prisoners, including detained illegal immigrants. State usage of private firms to operate correctional facilities varies from New Mexico (where nearly 44% of all New Mexico prisoners are held in private prisons) to New York and Illinois (where they do not employ a private system to run any of their correctional facilities). In general, Northeastern states typically do not use private prisons, while Southern states and some Western states make greater use of them. Several larger states with high incarceration rates also hold a disproportionately large share of state-level private prisoners. For example, private prisons hold less than 9% of Texas’ incarcerated population, but accounts for nearly 16% of all state-level private prisoners because of the number of prisoners held in the state.3

From 2000 until 2010, there was an increase of approximately 45% in the amount of inmates housed in private facilities across the country. In 2016, the Assistant Attorney General declared that no current contracts with private entities running correction facilities should be renewed and no new contracts should be implemented. In 2017, the Attorney General rescinded that order.

There are several large companies in the prison business such as Core Civic (formerly Corrections Corporation of America), the GEO Group (formerly known as Wackenhut Securities) and Management and Training Corporation.

According to the Bureau of Justice Statistics, surveys conducted from 2000 through 2016 indicate that the amount of private inmates were broken down as follows:4 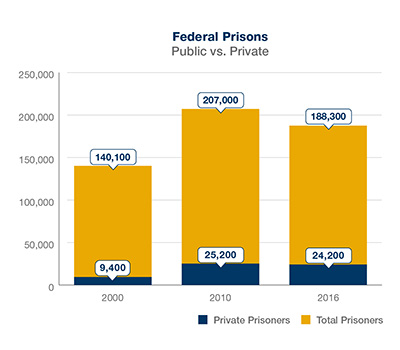 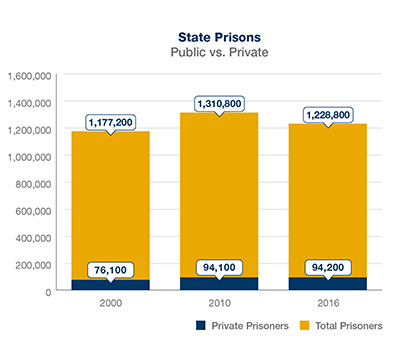 While County and local jailing facilities may outsource certain services (e.g. medical, corrections, etc.), its full privatization has been limited to state prisons driven primarily by the length of incarceration at the state and Federal level (i.e. vs local). However, full privatization may be considered at the local level for the majority of states. While it is difficult to determine whether there will be a significant trend towards building private facilities, more states are seeing local jurisdictions considering private options, including several Pennsylvania counties. Jurisdictions with multiple jails may also consider privatization of only a subset of their facilities. Public entities are reviewing all services provided to determine what elements can be outsourced to private entities. The largest considerations are health care and food services for almost half of all state prisons and jails utilizing private healthcare in 2016.5

A public entity should carefully consider the pros and cons of privatization prior to contracting out any prison or jail services. One of the largest potential benefits of privatization is the cost savings. However, research into the cost savings of privatization produces mixed results. While some studies assert savings of up to 14%, other studies have found private prisons are equally as costly as public prisons. The U.S. Department of Justice's National Institute of Justice found that private prisons had a higher quality of services than traditional prisons.2

Another potential benefit was that competition would fuel the efficiencies and associated cost savings. This may be waning as the number of firms offering outsourced services has fallen from twelve to four over the last 20 years. Many companies have been absorbed by mergers or acquisitions with only a few new companies entering the market. Based on available prison facility information, it’s estimated that the two largest private prison companies account for around 55% and 30% of all private prison beds, respectively, and the three largest firms provide over 96% of the total number of private prison beds.2

The transfer of liability exposure is also viewed as another potentially significant benefit of privatization. Prisons and jails provide significant risk that must be adequately managed, through the implementation of effective risk management and loss control measures, as well as the purchase of insurance. Transferring this liability to a private company could reduce the need for such insurance, and potentially provide further cost savings. To ensure this benefit, it is important that the contract include indemnity language which holds the public entity harmless for any actions of the private company. Another consideration is that private companies are not afforded the same governmental immunities as public entities. The US Court of Appeals ruled in Richardson et al. v. McKnight that private prison guards were not entitled to qualified immunity in a suit brought by inmates alleging civil rights violations. Even with an indemnity agreement, the public entity may still face claims for failing to adequately monitor the private company and enforce performance standards. Other potential benefits of privatization include addressing prison and jail overcrowding and providing economic benefit to a community.6

There are also significant concerns with the privatization of prisons and jails. Privatization of correctional functions are politically controversial. Opponents of privatization argue that it is unethical for a company’s profits to be tied directly to incarceration as it incentivizes high incarceration rates (sometimes artificially) and cutting service costs to maximize profits. A recent study of Mississippi prisons found that inmates held in private prisons served seven percent longer sentences on average when compared to public prisons 7. Further, one of the most effective ways for private corrections companies to save money is to pay their employees lower wages then the public corrections employees. This may result in higher staff turnover and raises potential safety concerns for the private facility. A 2016 Department of Justice Report found that contract prisons were associated with higher safety and security incidents per capita when compared to publicly run prisons 8. A public entity should actively monitor a private prison or outsourced services to ensure safety and service standards are met.

While the concept of private correctional facilities is not new, there is conflicting feedback as to its effectiveness. Whether at the state prison level or at the local municipal jails /detention centers, public entities should carefully consider and weigh the cost benefits of privatizing correctional functions. It is critical to memorialize any transfer of liability. This includes ensuring that the private company providing the services has an appropriate amount of insurance, naming the public entity as an additional insured and holding the entity harmless for the actions of the private firm. At the same time, it is important that the public entity enforce safety guidelines to ensure the private facility complies with all regulations. Finally, it is essential that entities structure their contracts with private firms to incentivize performance and avoid potential moral conflicts and negative repercussions against the public entity.

3 Private Prisons in the United States. The Sentencing Project. August 2017.

5 “Welcome to Jail Inc: how private companies make money off US prisons”. The Guardian. https://www.theguardian.com/us-news/2016/jun/16/us-prisons-jail-private-healthcare-companies-profit

8 “Review of the Federal Bureau of Prisons’ Monitoring of Contract Prisons, Evaluation and Inspections Report 16-06”. Department of Justice, Office of Inspector General. Released 8/11/16