Check out our latest AgBrag now! 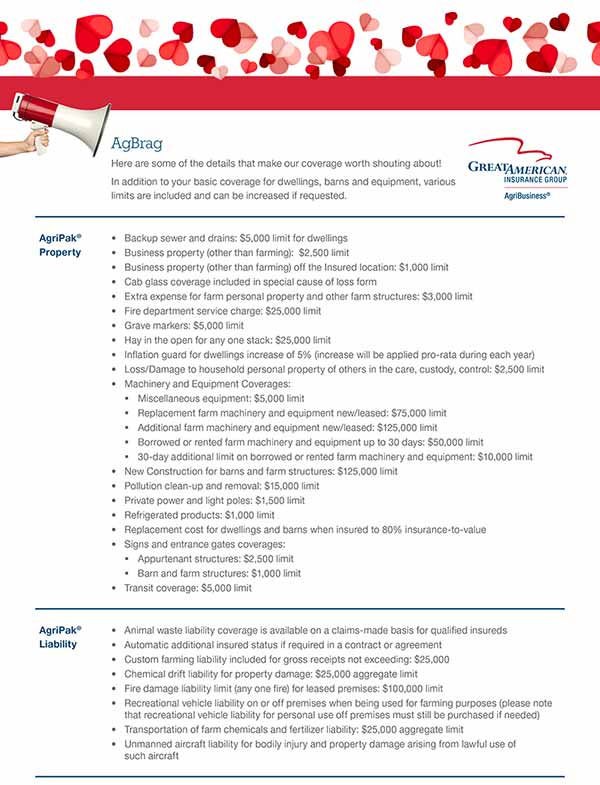 Please note that some items aren’t available yet in all states, so please get with your underwriter if you have questions.

Q: John loaded his truck and trailer to travel to a show in another state. He brought his $10,000 championship roping saddle and $5,000 western saddle with him. He stayed in a hotel for the evening. The saddles were locked safely in the truck. When he got in his truck in the morning to go to the show, he discovered his rear window was broken and both saddles were missing. He has $10,000 in miscellaneous farm personal property – tack and equipment coverage on his policy. He does not have the Equine Coverage Extension Endorsement. With a $1,000 deductible on coverage E, how much would he be paid for this loss?

A: Nothing would be paid for this loss under this policy. The saddles were not at a covered location and were not scheduled.

Q: If John had the Equine Coverage Extension Endorsement, it would pay for the amount of loss or damage in excess of the $500 deductible up to the applicable limit of insurance. So, how much would be covered for John’s claim with the endorsement?

Q: John has some really bad luck. When he returned home from the show, he found that someone cut the lock on his gate and his $5,000 hay baler was stolen. He has a $10,000 miscellaneous farm personal property policy – equipment limit with a $1,000 deductible. How much would be covered for this claim?

A: Nothing would be paid for this loss under this policy. Hay balers are excluded from miscellaneous farm equipment.

Q: John is behind on his farm chores and needs to replace the hay baler. On the way to the farm supply store, he was rear ended. The other party’s insurance lapsed three days prior; John has a $2,500 collision deductible. The repair shop estimates the damages to be $1,000. For once, John is in luck and has the Waiver of Collision Deductible on his policy. He buys his new hay baler and goes home to start his chores. Two weeks later, he reports his claim for damages to his truck. How much would be covered for this claim?

A: Nothing – claims must be reported within 10 days.

Q: If the claim would have been submitted within the 10-day period, how much would be covered?