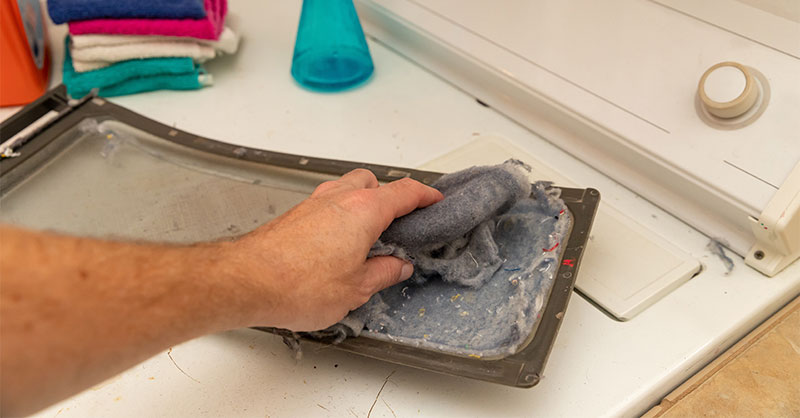 Clean the lint filter before or after each use to reduce the risk of fire caused by accumulated dust and lint.

According to the U.S Fire Administration, an estimated 2,900 clothes dryer fires in residential buildings are reported to U.S. fire departments each year, causing approximately:

What may be the most concerning part is that most of these fires could have been prevented by practicing good housekeeping behaviors.

The U.S. Fire Administration performed a study spanning from 2008 to 2010, that analyzed data from clothes dryer fires in residential buildings. Below are some of the results of their research:

This data shows that dust, fiber, lint and clothing accounted for over half of ignition sources in these fires.1

When lint traps are not cleaned as often as they should, and vent systems are not checked and cleaned regularly, airflow is reduced due to lint buildup in the screen or other areas around the dryer. This can cause the dryer to perform poorly, operate at elevated temperatures and possibly overheat.

Problems can also occur if improper items are placed in dryers, such as foam-backed rugs or athletic shoes. Additionally, issues can arise if appliances are ventilated with plastic, vinyl or aluminum foil exhaust materials.

To achieve optimal airflow and reduce lint buildup, an all-metal dryer vent or duct is recommended. Rigid or flexible metal venting and ducting materials help sustain airflow and reduce operating costs, while extending the life of the dryer and clothing, due to lower drying temperatures.

Washing machines are a significant source of water damage or flood damage in homes and institutions where they are used. In fact, washing machine hose failures cause about $150 million in damage in the United States and Canada each year.2

To reduce the chances that your hoses could fail, the following precautions should be taken:

Use our product concierge to personalize your search to your specific needs.