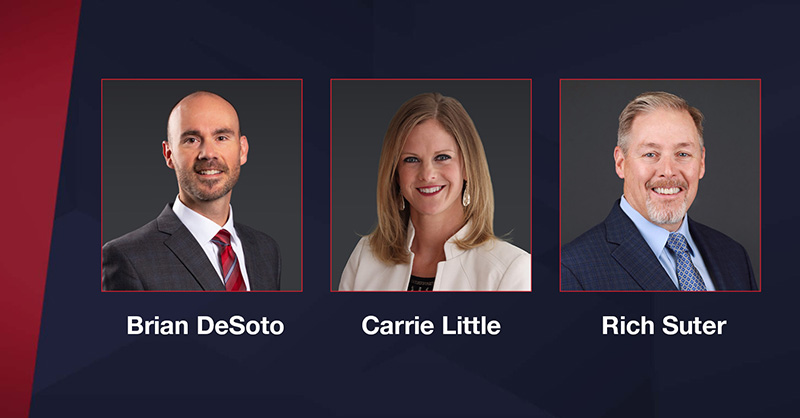 Mrs. Little joined Great American in 2004 as a Business Analyst. In 2006, she transitioned to the Company’s leadership development program and was placed within the Specialty Human Services Division. During her tenure within Specialty Human Services, she held various leadership roles of increasing responsibility and most recently served as Divisional Senior Vice President. In this new role, she will oversee the Accident & Health, Surety Bonds, Public Sector, Excess Liability and Innovative Markets Divisions and Great American’s Loss Control services.

Mrs. Little earned a Bachelor of Science from Miami University of Ohio and a Master in Business Administration from Xavier University. She also holds the Associate in Claims (AIC) and the Chartered Property Casualty Underwriter (CPCU) designations.

Mr. Suter joined Great America’s Alternative Markets Division in 2012. Since that time, he has served in a variety of leadership roles within the division. He was promoted to Divisional President in 2017. Mr. Suter will continue to serve in this role with the additional responsibilities of overseeing Great American’s Strategy & Innovation, New Revenue & Strategic Partnerships and Agency & Broker Relations functions.

Mr. Suter earned a Bachelor of Science from the United States Military Academy at West Point and his Juris Doctor (J.D.) from Temple University School of Law. He holds the Chartered Property Casualty Underwriter (CPCU) designation and has 30 years of insurance industry experience.

01 17, 2023 Great American is pleased to announce the promotion of Brian DeSoto, Carrie Little and Richard Suter to the role of Divisional Group President.

01 11, 2023 Great American Insurance Group is pleased to announce the promotion of Jason Kyd and Melissa Person to the role of Divisional Senior Vice President.

Elizabeth B. Leaird and Kenneth B. Patrick Promoted to the Role of Divisional President within Great American Insurance Group

12 21, 2022 Great American Insurance Group is pleased to announce the promotion of Elizabeth B. Leaird and Kenneth B. Patrick to the role of Divisional President.

12 20, 2022 Great American Insurance Group is pleased to announce the hiring of Kevin A. Henry as a Divisional Assistant Vice President within its Fidelity / Crime Division.