Lindner Legacy Lives on at the University of Cincinnati 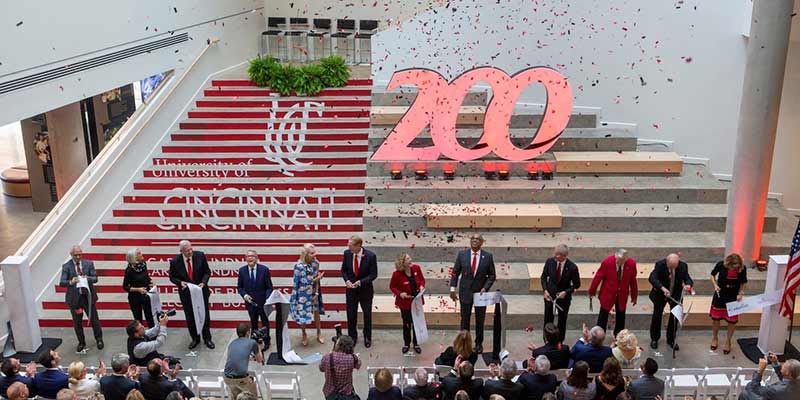 Our parent company’s founder, Carl H. Lindner, Jr., is remembered as an innovative, self-made entrepreneur and generous philanthropist whose success was grounded in his faith and love for his family. He created an extraordinary legacy that extends well beyond his Cincinnati hometown. His advocacy and support for the University of Cincinnati was recently recognized with the unveiling of the new Carl H. Lindner College of Business building. A ceremonial ribbon cutting ceremony took place on September 19, 2019. Guests in attendance included the Lindner family, Ohio Governor Mike DeWine, University of Cincinnati President Neville Pinto, Lindner College of Business Dean Marianne Lewis, representatives from the UC Board of Trustees, local business leaders, faculty, students, alumni and company representatives. It took nearly two and a half years to construct the cutting edge 225,000-square-foot facility. The building boasts an expansive floor plan with a 150-seat, two-story lecture hall, a 250-seat auditorium, research labs, exam and tutoring areas, huddle and breakout rooms, and plenty of open workspaces. The new home to the Carl H. Lindner College of Business has 70% more classroom space than the former location. With approximately 30 square feet of learning space per student, the college is poised for growth that is well underway in its enrollment, academic programming and opportunities to partner with the business community.

“The stunning architecture and the fresh energy just took our breath away,” said Carl Lindner III, about his and his family’s first visit to the new building. “We can see how this building is going to transform learning and teaching for generations of Lindner students.”

In his remarks at the ribbon cutting, Craig Lindner noted, “Our company is very fortunate to employ a large contingent of talented UC graduates. Approximately 50% of our American Financial Group and Great American Insurance Group senior leadership team is comprised of UC graduates." The Lindner Legacy area is a permanent exhibit that pays tribute to Carl H. Lindner, Jr. The space was designed to share Carl H. Lindner, Jr.’s story with students, faculty, staff and visitors with a focus on his entrepreneurial spirit, optimism, work ethic, creativity and philanthropy. It was built to be inspirational, emphasizing Carl H. Lindner, Jr.’s values, character and beliefs while sharing the importance of his faith and family.

We supported the project by helping to identify and collect items from our corporate archive to put in the display cases in the Lindner Legacy area. Currently showcased in the space is Carl H. Lindner Jr.’s hard hat from the original business school’s 1982 groundbreaking, as well as Carl Lindner III and Craig Lindner’s hard hats from the 2017 groundbreaking of the new building. We were also able to recover the original copy of the 1985 UC Commencement address given by Carl H. Lindner, Jr., which included his handwritten edits.