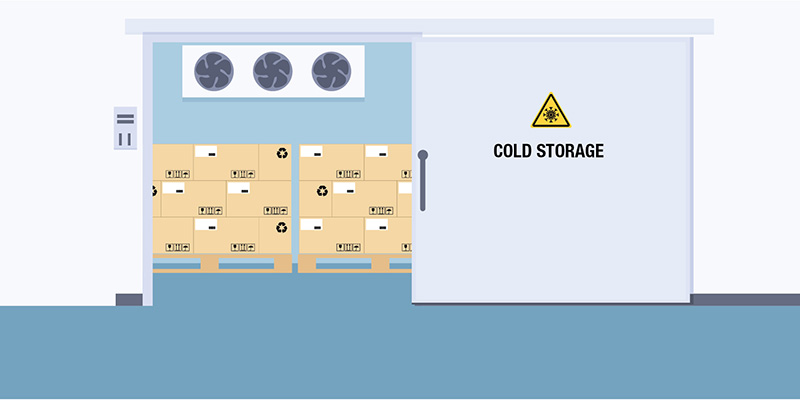 Ammonia has been used as a refrigerant in large-scale cooling applications for nearly a century. Industries such as meat processing, dairy and ice cream plants, wineries and breweries, bottling plants, produce handling and chemical manufacturing often rely on ammonia refrigeration for their cold storage and processing facilities.

In the United States, commercial-scale ammonia refrigeration became widespread in the early 1900s, with use at block ice and food processing facilities. By the 1920s, chlorofluorocarbons (CFCs) replaced ammonia as the refrigerant of choice in many applications as CFCs were believed to be a better alternative that did not pose the same flammability and safety concerns as ammonia.

However, as we know now, CFCs and hydrofluorocarbons (HFCs) are harmful to the environment and significant contributors to ozone depletion. In recent years, ammonia refrigeration has seen a bit of a resurgence as a cleaner and more sustainable refrigerant option, often being used for chillers in new “green” construction.

Over the years, ammonia has remained the most commonly used refrigerant in largest-scale industrial refrigeration systems such as chemical manufacturing and food processing.

It is likely that any consumable goods – food or beverage – reaching your grocery store or local restaurant has passed through an ammonia refrigeration facility in the United States.

What is Anhydrous Ammonia?

Ammonia is naturally occurring and is harmless to the environment, with negligible impacts in terms of ozone depletion and global warming. Refrigeration systems using anhydrous ammonia can be 20 percent more efficient and cost as little as one-tenth of those systems relying on traditional synthetic refrigerants.

Anhydrous ammonia however poses potential hazards that other refrigerants do not.


When released to the atmosphere, anhydrous ammonia will rapidly absorb moisture from air and form a dense, visible white cloud which can travel along the ground under certain conditions, potentially affecting the surrounding area – including nearby businesses, homes, vegetation and even vehicular traffic. Low-level exposure to an anhydrous ammonia release can cause headaches, nausea and coughing, while higher level exposures can cause fluid in the lungs, severe shortness of breath, and in some cases, lead to death.

Anhydrous ammonia can also be flammable when present in air at ~15-28% by volume and can explode under the right conditions. Property damage is not uncommon for an anhydrous ammonia release.

Due to the potential acute threats an ammonia release could pose to facility workers and a nearby population, ammonia refrigeration systems are regulated and monitored by OSHA, the EPA (under the Clean Air Act) and the Department of Homeland Security (through the Chemical Facility Anti-Terrorism Standards).

The Clean Air Act designates anhydrous ammonia as a regulated substance under the Chemical Accident Prevention Program. Per the regulations and guidance, any facility that uses (or stores) 10,000 pounds or more of anhydrous ammonia must submit a written Risk Management Plan to the EPA which, amongst other things, evaluates worst-case release scenarios. Facilities that may impact potential receptors under worst-case scenarios and those that have a history of accidental releases are required to conduct annual process hazard analyses and complete a release prevention program tailored for the specific location.

OSHA and DHS standards apply a similar minimum threshold quantity of 10,000 pounds or ~2,000 gallons. If facilities have less than the minimum threshold of anhydrous ammonia, they are still subject to the General Duty Clause, which states that facilities with a regulated substance must comply with the proper safety and management practices necessary to prevent an accidental release.

According to a 2015 EPA Enforcement Alert, many anhydrous ammonia refrigeration facilities fail to properly manage the regulated substance as required under the Clean Air Act and consequently, are under greater scrutiny from the EPA. For example, in September 2021, EPA announced that civil fines had been levied against four California facilities for alleged violations of the Clean Air Act’s ammonia requirements. In this instance, failing to comply with process safety and hazard evaluation requirements resulted in monetary penalties ranging from $100,000 to $300,000+, in addition to meeting regulatory requirements.

Over the course of operation, a refrigeration system can be subject to corrosion, erosion, upsets, vibration and other conditions that may result in a leak or spill. Leaks may also occur during the loading and unloading of ammonia at the facility but typical ammonia refrigeration systems are closed loop, so this should be infrequent.

Careful consideration in the facility design, thorough operator training and routine inspections can be instrumental in preventing accidental releases.

In the event of a release, significant remediation is not needed in the traditional sense as with other persisting environmental issues. Ventilation and cold-water spray neutralization are two common methods to mitigate a release. Temporary evacuation of the site and surrounding properties may also be required. Facilities should consider the overall impact a release can have on their operations beyond remediation costs. Business interruption, loss of business, loss of product, lawsuits alleging injury to third parties, damage to brand name and OSHA and EPA citations can add up to be financially devastating.

EPA has responded to violations and accidental releases with strict enforcement actions and by imposing millions of dollars in civil penalties. To return to compliance following a release incident, companies can spend additional millions on updating refrigeration equipment, purchasing PPE, providing training for facility workers and emergency responders, and reaching monetary settlements with those impacted.

"Ever consider how an anhydrous ammonia spill may impact your clients?" The following claim situations illustrate exposures that could affect their operations!

A contractor was hired to upgrade the refrigeration system of a cold storage warehouse. During installation, a failed valve system caused an ammonia leak. The release resulted in a toxic cloud of ammonia that caused respiratory distress of the onsite workers and evacuation of neighboring businesses. The warehouse was held responsible for the defense of the bodily injury claims as well as numerous business interruption claims that were filed by surrounding tenants.

A Midwest producer of soybeans sustained a large ammonia release when the piping on their above-ground storage tank failed causing the release of approximately 5,000 lbs of liquid ammonia and additional ammonia vapor. As a result, clean-up costs were incurred and a number of people at a neighboring facility complained of respiratory issues as a result of the release. Claims were made for the clean-up costs and bodily injury claims.

To help you address these as well as other environmental exposures with your clients, visit our Claims Scenario Library.

Ryan Smith is a Senior Loss Control Consultant with Great American’s Environmental Division. Ryan has accumulated almost a decade of environmental consulting experience, previously working for a nationally recognized engineering, science and operations consulting firm. He is a graduate of the University of Maryland, where he earned a Bachelor of Science degree in environmental science with a focus in ecological technology and design. Recently, Ryan completed his Master of Business Administration in corporate sustainability, risk management and innovation strategy from Boston University. Capitalizing on his technical expertise, he provides site evaluation and prevention assessment to support our underwriters in risk identification. Ryan is based out of our Boston, Massachusetts office.